Get cool educational apps for your Android phone 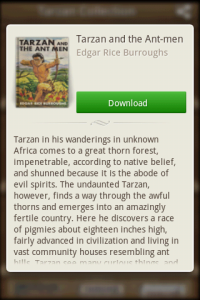 Do you like Tarzan books? This application with  Tarzan books is made for you, so you can enjoy reading on your andriod phone for free!

This app has one book that is already downloaded. If you want to read other books from the collection you can download them and then delete them after the reading. In that way you can save space on your sd card or internal memory. Every book has a short description at the beginning, so yu can choose better which one you want to read!

Edgar Rice Burroughs (September 1, 1875 – March 19, 1950) was an American author, best known for his creation of the jungle hero Tarzan, although he also produced works in many genres.

This collection is made of all Tarzan books:

Tarzan the Untamed is a book written by Edgar Rice Burroughs, the seventh in his series of books about the title character Tarzan. It was originally published as two separate stories serialized in different pulp magazines; “Tarzan the Untamed” (AKA “Tarzan and the Huns”) in Redbook from March to August, 1919, and “Tarzan and the Valley of Luna” in All-Story Weekly from March to April 1920. The two stories were combined under the title of the first in the first book edition, published in 1920 by A. C. McClurg. In order of writing, the book follows Jungle Tales of Tarzan, a collection of short stories about the ape-man’s youth. Chronologically, it follows Tarzan and the Jewels of Opar.

Tarzan and the Golden Lion :

Tarzan and the Golden Lion is the ninth in his series of books about the title character Tarzan. It was first published as a seven part serial in Argosy All-Story Weekly beginning in December 1922; and then as a complete novel by A.C. McClurg & Co. on March 24, 1923.

Tarzan of the Apes :

Tarzan of the Apes is a novel written by Edgar Rice Burroughs, the first in a series of books about the title character Tarzan. It was first published in the pulp magazine All-Story Magazine in October, 1912; the first book edition was published in 1914. The character was so popular that Burroughs continued the series into the 1940s with two dozen sequels.